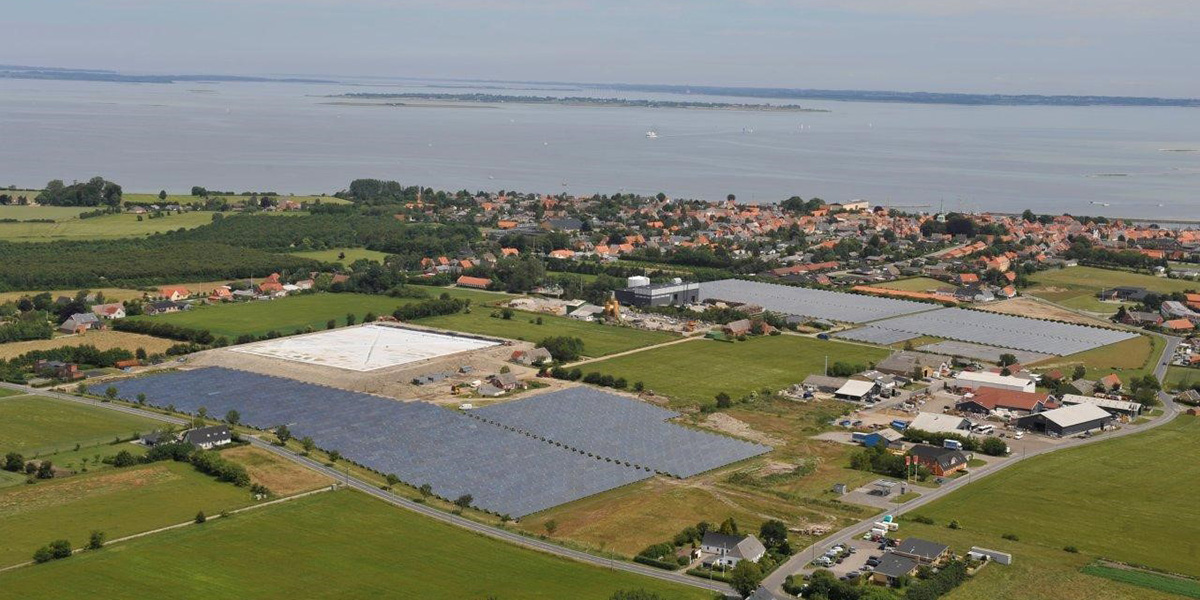 District heating and solar thermal can play a vital role in the transformation of the heat sector in Europe. District heating is one major approach to improving overall energy efficiency in urban areas and increasing the proportion of renewable heat. Solar thermal energy is a zero-emission renewable resource, available all over Europe and able to deliver heat at stable prices over the long term. 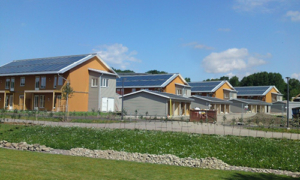 Solar district heating, or SDH for short, is a tried and trusted technology. Researchers and industry professionals have collected over 20 years’ experience in developing, operating and maintaining SDH systems. The last decade has also seen a rising interest in the commercial use of these systems.

So far, 300 plants above 350 kWth of capacity have been put into operation in Europe. The market has experienced a boom in Denmark and sound growth in several other places, such as Austria and Germany. The total installed capacity amounts to 1100 MWth and the mean market growth 2011-2016 was more than 35% annually. Other European countries have begun to follow suit and new markets have started to develop.

A local network is a good option for heating renovated buildings or new urban districts. Usually, solar thermal contributes up to 20% to total heat supply, although the addition of seasonal storage can increase the solar fraction to as much as 50%. One centralised system based on biomass and 680 m² of roof-integrated solar thermal collectors has been installed in Vallda Heberg, a residential area set up in 2013 in Sweden. 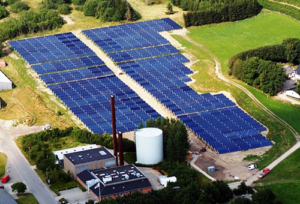 Solar district heating plant with 8 000 m2 of ground mounted collectors (5 MWth) and a buffer storage tank from 2007 in Brædstrup, Denmark

SDH systems delivering heat to towns and communities in the countryside allow for a fast and comprehensive transition to local renewable resources. In Büsingen, Germany, a 1090 m² collector system provides the entire heat load for 100 buildings in summer, preventing the uneconomical operation of a biomass boiler. This district heating network has been in use since 2013.

Large urban district heating networks typically source thermal energy from combined heat and power systems, heating plants or industrial waste heat. Provided that sufficient area is available, the decentralised arrangement of these large-scale solar thermal installations is one possibility for increasing the proportion of renewable energy in district heating. For example, in Graz, more than 16 500 m² of solar thermal collectors feed heat into the city’s district network and subsystems at several locations. 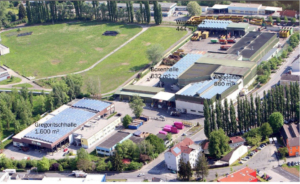 Solar collectors – mounted on buildings at a recycling site in 2006 – connected to the district heating network in Graz, Austria.

Combined with other technologies

Large solar plants can also be combined with other technologies for heat and power production. Denmark has several smart district heating plants. One of them has been installed in Gram and is equipped with 44 800 m² of solar thermal collectors, a heat pump, gas-fired CHP units, an electrode boiler and backup fossil fuel boilers. The plant’s pit thermal energy storage measuring 122 000 m³ allows for flexibility in the use of these energy generation technologies to offset power price fluctuations.